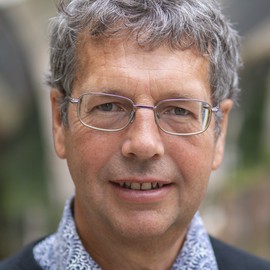 University of Cambridge and Chalmers Institute of Technology

A Robot Scientist is a physically implemented robotic system that applies techniques from artificial intelligence to execute cycles of automated scientific experimentation. A Robot Scientist can automatically execute cycles of hypothesis formation, selection of efficient experiments to discriminate between hypotheses, execution of experiments using laboratory automation equipment, and analysis of results. The motivation for developing Robot Scientists is to both to better understand the scientific method, and to make scientific research more efficient. The Robot Scientist ‘Adam’ was the first machine to autonomously discover scientific knowledge. The Robot Scientist ‘Eve’ was originally developed to automate early-stage drug development, with specific application to neglected tropical disease such as malaria, it is now working on anti-Corna drugs. I am now working on Genesis, a third-generation Robot Scientist designed to work on yeast systems biology. Genesis will be able to run 10,000 cycles of hypothesis-led experiment in parallel per day. I believe that it is likely that advances in AI and lab automation will drive the development of ever-smarter Robot Scientists. Therefore, I am co-organising the ‘Nobel Turing Challenge’ to develop: AI systems capable of making Nobel- quality scientific discoveries highly autonomously at a level comparable, and possibly superior, to the best human scientists by 2050.

Dr. Ross D. King has joint positions at the University of Cambridge, and Chalmers Institute of Technology, Sweden, and he is a Fellow of the Alan Turing Institute, London. He is one of the most experienced machine learning researchers in Europe. His main research interest is the interface between computer science and science. He originated the idea of a ‘Robot Scientist’: integrating AI and laboratory robotics to physically implement closed-loop scientific discovery. His Robot Scientist ‘Adam’ was the first machine to autonomously discover scientific knowledge. His Robot Scientist ‘Eve’ is currently searching for drugs against neglected tropical diseases, and cancer. This research has been published in top scientific journals, Science, Nature, etc. and has received wide publicity. His other core research interest is DNA computing. He developed the first nondeterministic universal Turing machine, and is now working on ‘DNA supremacy’: a DNA computer that can solve larger NP complete problems that conventional or quantum computers. He is also very interested in applying AI and micro-robotics to double the number of known species.